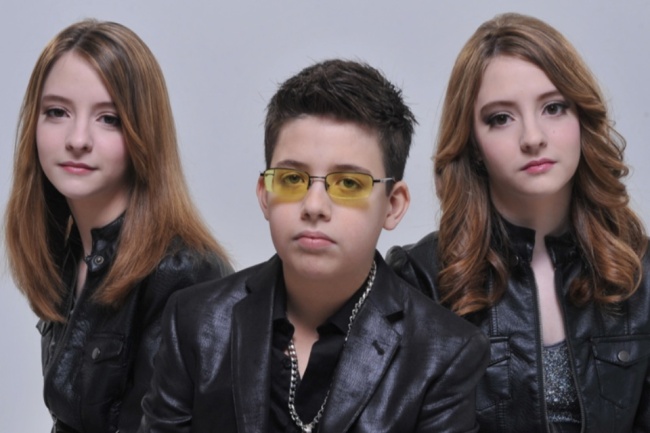 Sibling Pop and TV stars Ariel, Zoey and Eli are making a splash with their new single “Hey Bully” on Youtube! The pop group has really helped move forward the anti-bullying movement by spreading the word with their super catchy song off of their new album “Vision-Chapter 1”.Not only is it full of powerful lyrics, but the music video really shows how much they care about the cause. AZ&E want their fans to know that nothing can hold them down!

Recently, AZ&E have been back in the music studio with songwriter Jim Peterik, of the Grammy™ award-winning hit “Eye of the Tiger.”  Along with their Production Company – Soup J Productions, their Label – World Stage International and their Executive Producer Matt Engelbert, they traveled from their hometown in Michigan to meet up with Peterik at his Chicago studio.  Having such a successful mentor in Peterik is a dream come true for this trio.

In addition to their music, they also star in their own television show “Ariel, Zoey and Eli Too!,” which airs Saturday mornings on NBC-TV, and has featured such guests as Miranda Cosgrove and Cody Simpson.  AZ&E have a new television show in the works that will give everyone a look into how their album “Vision” was created with Peterik.  “Vision” is full of songs that both kids and adults will love.

You can watch the new video for “Hey Bully” here at: http://bit.ly/AZE2_Hey-Bully
You can also listen and download the first chapter of their album “Vision” here.
Connect with AZ&E on Twitter and Facebook.